It’s important for visitors to know that the chances of being attacked by a shark are still very slim. While there is very little you can do to ward off an attack beyond basic safety tips, the majority of people who are attacked survive.

Between Hollywood movies constantly portraying them as man-eaters, rampant shark finning in East Asian nations, and the controversial shark culls in Western Australia in response to attacks on surfers, it’s a pretty tough time to share the ocean with humans. In fact, by some estimates, 70-100 million sharks are killed by humans each year, and up to 20 different species of sharks are facing possible extinction.

During our Maui kayaking tours, one thing we’ve found is that a lot of visitors are seriously afraid of sharks, and most of the fear is from misinformation and their inaccurate portrayal.

So, in an effort to educate our island visitors on the positive benefits of sharks – and potentially alleviate some of the fears that seem intrinsic to entering the water – we hope this guide can educate and inform about the realities of sharks in Maui. 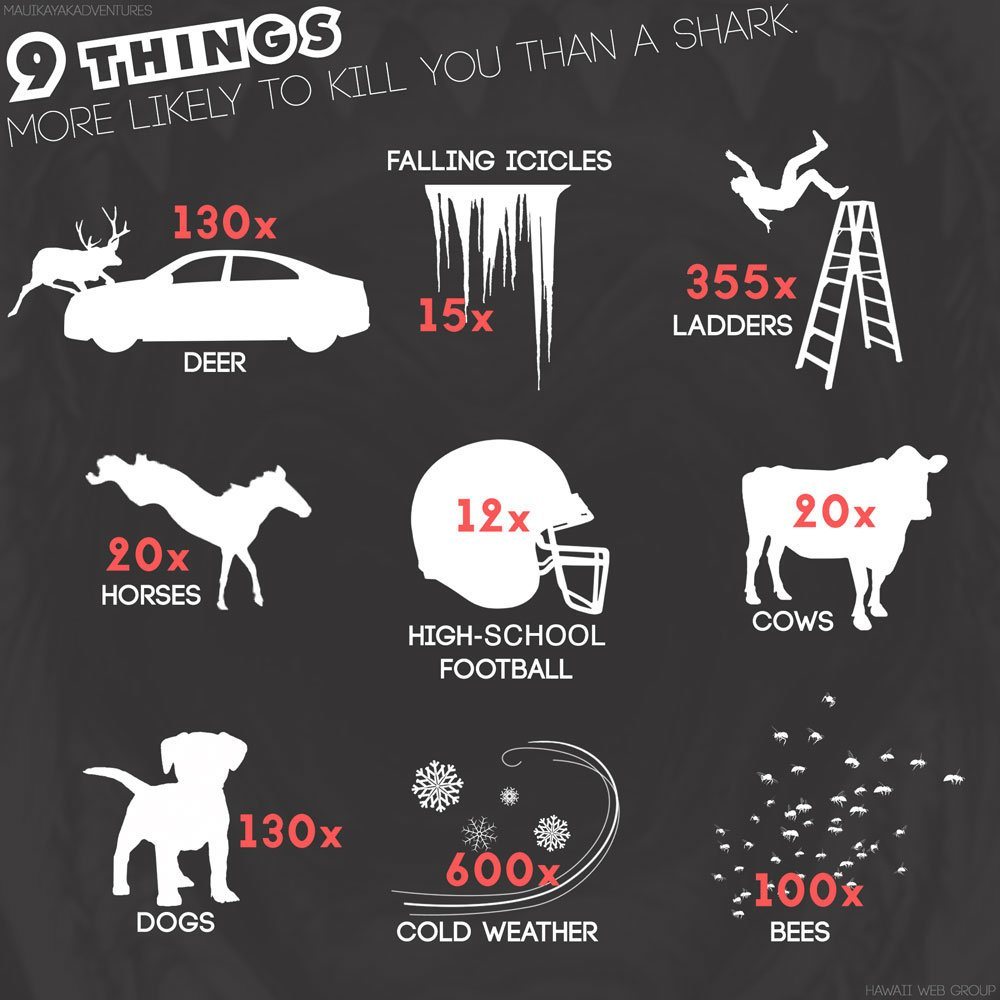 What Are The Chances Of Being Attacked By A Shark?

From a statistical standpoint, being attacked by a shark is one of the last things you should worry about when playing in the ocean in Maui. Any number of things—from driving to the airport, to napping beneath a coconut tree—are statistically more dangerous than sharks. So are dogs, deer, bathtubs, and ants—all of which, according to this list, annually kill more people than sharks.

Surprised? There’s more: According to another list, sex, oysters, room fresheners, and Christmas trees all kill more people than sharks.

So do corks, cows, beds, tripping, icicles, ladders, and football (as seen on this list here.)

For Hawaii specific numbers, here are some figures from the Department of Land and Natural Resources about the incidents of shark encounters in Hawaii.

From the chart above, there have been 116 confirmed shark encounters over a period of 34 years—only 5 of which were fatal. For those of you keeping track, that’s an average of .14 deaths/year from shark attacks in Hawaii, and 3.4 incidents per year across all of the Hawaiian Islands. Seeing as over 8 million people visit Hawaii annually, the chances of tangling with a shark in Hawaii are very, very slim.

What’s more, as you can see from the chart below, many of the confirmed incidents of shark attacks are only on surfers and fishermen.

Why Are Sharks Important For The Ocean?

Now that we know that sharks aren’t really dangerous (when compared to almost everything else…), it’s important to understand that sharks are crucial for a healthy, functioning ecosystem. As apex predators in the marine environment, sharks help to control population numbers of others animals in the sea. If you were to remove the sharks entirely from an ecosystem (which is happening from overfishing), then other species would overpopulate and throw the balance out of whack.

A famous example of this is the situation that’s happening in the North Atlantic:

Over the last 20 years, overfishing and shark bycatch has resulted in a 75% reduction in North Atlantic sharks. If you’re a ray or skate this is fantastic news (since not as many sharks are hunting you), but if you’re a scallop, oyster, clam, or bivalve, there are now 10x more rays that feed on scallops than only a few decades prior. The end result here is that scallops and clams are much harder to come by when fishing, and New England classics such as clam chowder are even being pulled from some menus.

What About Sharks In Hawaiian Culture?

Mano, as they’re known in the Hawaiian language, are revered and respected as ‘aumakua, or traditional family guardians. For families who have the shark as ‘aumakua, it’s believed that the shark is a deceased ancestor now living in another form.

For these families, it was considered kapu to hunt sharks or eat any of the meat, and even today there are many families with spiritual connections to the shark. Also, before the arrival of cannons and gunpowder, shark teeth were used in traditional weapons such as swords, knives, and clubs. This traditional art from can still be found at Hawaiian craft galleries today.

What Type Of Sharks Live In Maui?

While there are numerous species of sharks in Hawaii, for the most part, there are only six or seven species you can expect to see nearshore. Also, with the exception of white tip and black tip reef sharks, seeing a shark is so exceptionally rare that most locals have never seen one. If you do see a shark when visiting Hawaii—especially in clear, blue water—consider yourself lucky to have had the chance at such a rare encounter.

What Are Some Tips For Staying Safe?

Even though the chances of an attack are low, there are still some precautions that people can take to ensure their safety in the water.

Now that you know a bit more about sharks, it’s our hope we’ve created enough of an understanding to alleviate some of the fears. Sharks are vital members of our ecosystem and pose minimal threat to us humans, and by simply taking some basic precautions, you should be able to see sharks as beautiful creatures rather than something to fear.

Have more questions about sharks in Hawaii?

February on Maui
Scroll to top