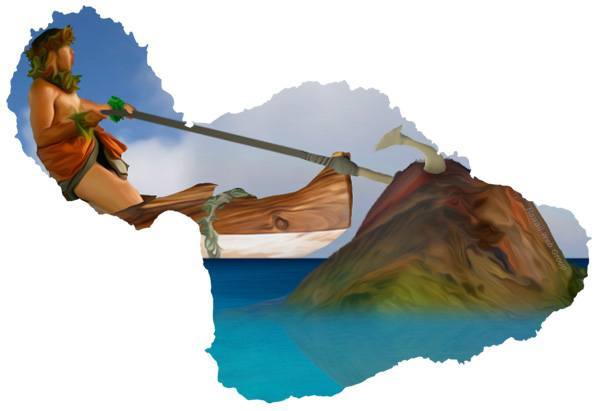 Ancient Hawaiian legends are important cultural pieces passed down from one generation to the next, often through storytelling, that highlight important tales of how the Hawaiian Islands were formed, where they got their name, and what each should be remembered for. Some of these same legends have been told throughout Tahiti, Samoa, Fiji, New Zealand and other Pacific Islands, all with their own variation. Ancient Hawaiians had a deep connection to nature and used myths and legends to explain how much of what we see today came about. While there are a number of fascinating legends throughout Hawaii, we obviously enjoy the ones that pertain specifically to Maui, legends of Maui, the most.

Maui, troubled by the fact that his mother, Hina, could not get her work done everyday before the sun set and noticing that the days were appearing shorter and shorter, had an idea for keeping the sun up longer each day. Approaching his four brothers for help, Maui said “Let us now catch the sun in a noose, so that we may compel him to move more slowly, in order that mankind may have long days to labour in to procure subsistence for themselves”, to which they responded, “Why, no man could approach it on account of its warmth, and the fierceness of its heat.” Confident in his abilities and surprised by his brothers’ lack of faith, he reminded them of how he had transformed into every bird in the forest and back into man, something they also considered impossible.

With renewed hope and help from his brothers, he began to twist ropes to form the noose he would use to lasso the sun. After it was complete, Maui and his brothers walked eastward toward the place where the sun rises, stopping during the day to hide, moving only at night to keep the element of surprise.

After successfully snaring the sun, making him struggle to get free, Maui demanded that he promise to travel more slowly, which the sun finally obliged to by promising Maui that he would go as slowly as desired. However, to keep him in constant fear, Maui left the snares fastened to the sun as a way to seal his promise indefinitely. 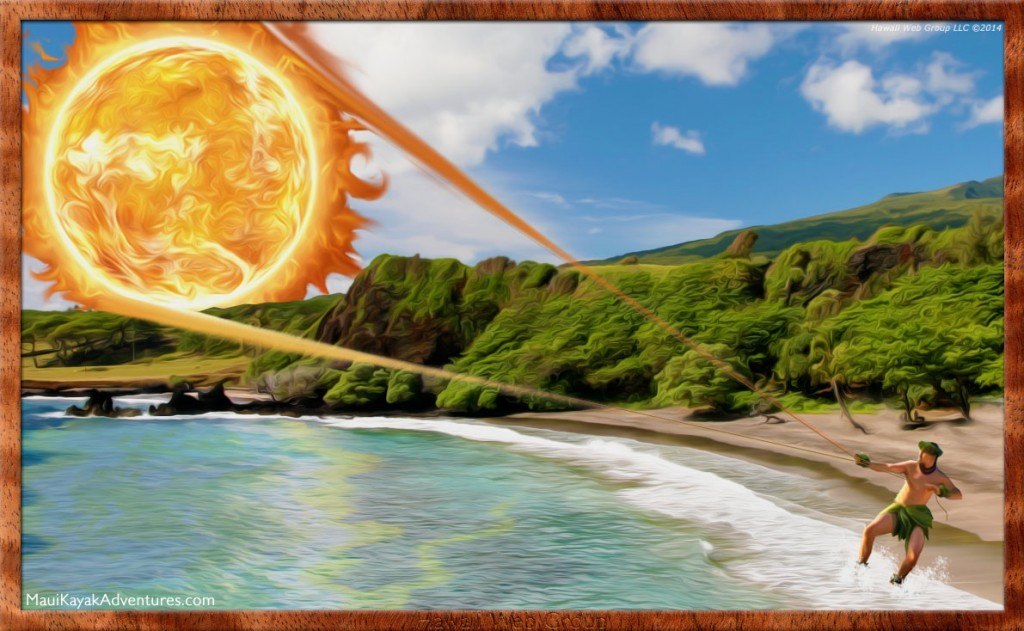 When Maui was a young man, the sky was so low that trees often became tangled in it, all the leaves were flattened and darkness surrounded the land. Men and women often had to crawl from one place to another because the sky was not tall enough to walk upright. Determined to change this, Maui visited a kahuna, or Hawaiian priest and healer, who tattooed him with a magic symbol on his forearm. Maui also sought out an old woman and drank from her gourd, giving him the great strength he would need to lift the sky.

After a great struggle, Maui was able to push the sky beyond the mountains, lifting the edges over the wide expanse of the ocean, where it remains to this day. His effort gave room for all creatures, plants, trees and man to grow and walk tall among nature. When dark storm clouds gather around Haleakala, it is said that they are afraid to stay for long in case Maui chooses to hurl them so far that they can never return. 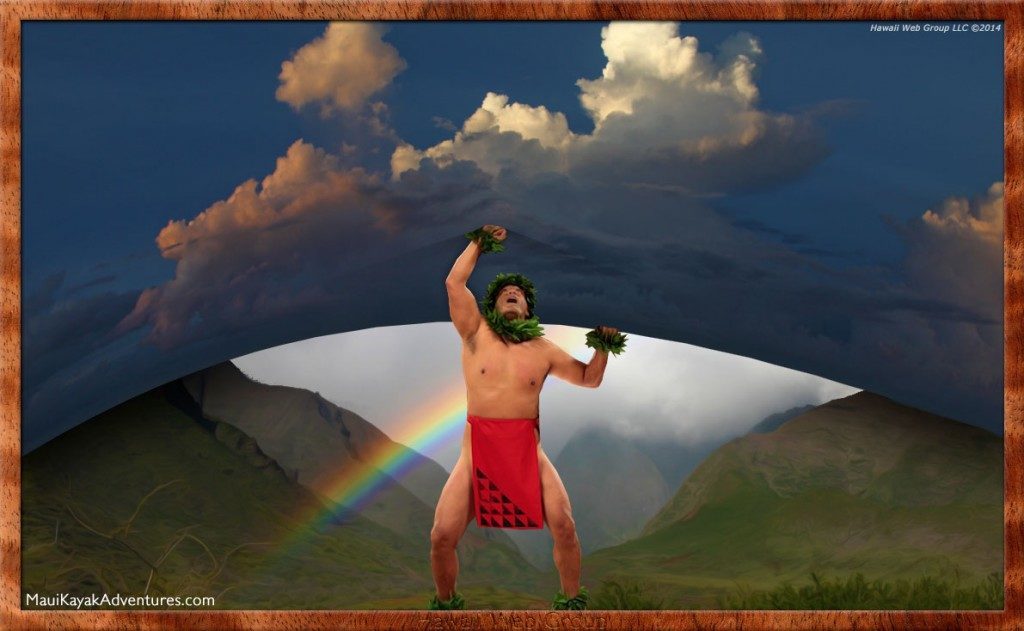 Fishing for an Island 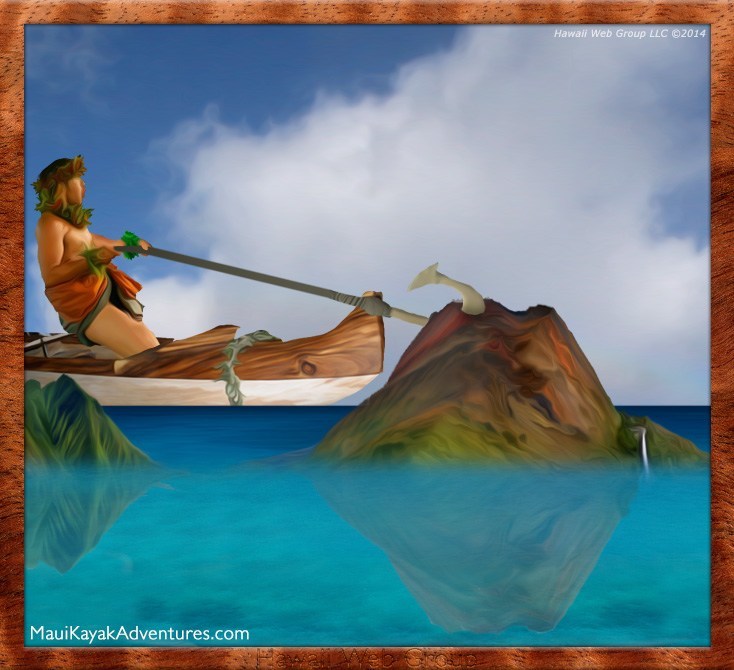 After suffering great ridicule from Hina and brothers for being an unsuccessful fisherman, Maui decided to prove himself once again. He traveled to the underworld to ask his ancestress for her jawbone to use as a hook and used his mother’s flock of sacred alae birds to use as bait.

Determined for his family to recognize him as a provider, Maui convinced his brothers to go out fishing in search of ulua and pimoe, paddling out farther and farther until they reached the perfect spot. Casting out the bird on the jawbone hook he had fashioned, Maui and his brothers caught hold of something. The line pulled tighter and tighter, making it a great struggle to hold onto the line and paddle the canoe simultaneously.

It was no fish that Maui had caught, however. With great surprise, Maui’s brothers witnessed a new island appear from the water, complete with lush mountains, valleys and lagoons, protected by cliffs and topped with mist and rainbows. It was to be a place of beauty and a place to live.

Discovering the Secret of Fire 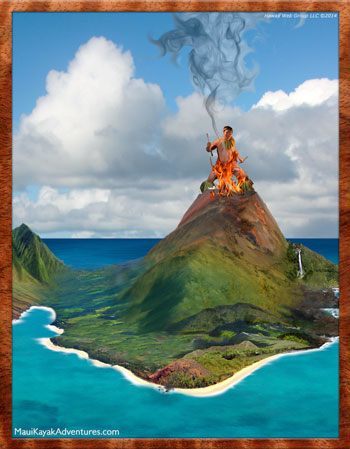 After existing on a diet of raw fish and vegetables, Maui longed for cooked food and the ability for his mother to cook with an open fire. While fishing with his brothers, Maui witnessed a plume of white smoke rising from the top of Haleakala. Determined to find out how it came to be, Maui rushed to the top of the crater and discovered an old alae hen smothering and attempting to hide it by the time he arrived.

Deciding to stick around until the hen started another fire the next day, the hen saw through his plan, noticing his absence on the canoe with his brothers. But Maui paid attention, too. By placing a large human-shaped log into the canoe with his brothers, he was able to trick the hen into thinking he was with them. Waiting and watching closely, Maui watched the birds gather sticks and leaves for kindling. He caught the old hen by the neck, determined to discover the secret of starting a fire for himself. Attempting to trick him, the old hen instructed Maui to rub two stalks of water plants and two reeds together, both resulting in unsuccessful attempts.

By tightening his grip on the hen’s neck, she desperately gave away her secret, finally telling Maui how to gather bark from the hau and bark from the sandalwood and rub them together. Maui discovered the secret of fire, but punished the old hen by branding the top of her head until all her feathers were burned away. This is the reason why all children of the alae birds are baldheaded to this day. 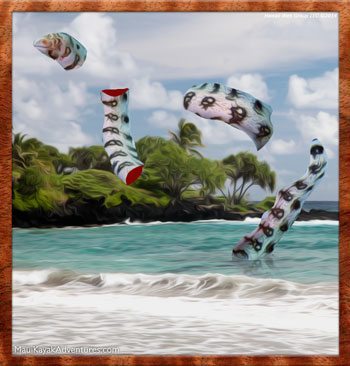 Kuna Loa was an evil eel who was angry at Maui’s mother, Hina, for not accepting his proposal to live with him. Although Maui had driven him away previously, Kuna Loa still longed for her, deciding that if he couldn’t have her, no one could.

He appeared at the cave that she lived in and created a diversion of water to flood and drown her in it. Maui, seeing the warning cloud above the cave from the slopes of Haleakala, grabbed his brothers to help save her. After arriving at the partially flooded cave, Maui split Kuna Lona’s damn with his magic ax, chasing him away by throwing lava rocks at him. Seeing no sign of him, everyone believed him to be dead.

Hina rejoiced by laying in the fields of sunshine, but Kuna Loa was not dead. He snuck up on her in the field and chased her through the surrounding forest until she was lifted by a nearby breadfruit tree. She called to Maui, who found her and cut the eel up into many pieces, throwing Kuna Loa once and for all into the sea. It is said that the eel’s head became fish, the tail the conger eel, the body the monsters of the sea, and the blood that fell into Wailuku River the freshwater eels. 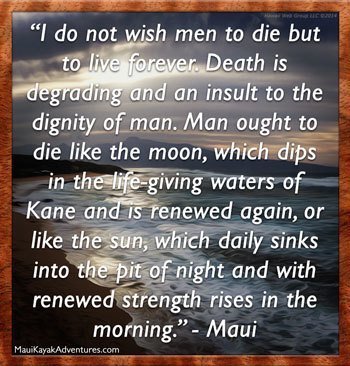 Longing for victory over death after successfully defeating so many obstacles on Earth, Maui was told that one of his ancestors, Hine-nui-te-po, also known as the Guardian of Life, would overcome him in his attempt at eternal life. Also, because his Father forgot to protect him from death during his newborn chant, he would inevitably have to die.

Not accepting this, Maui said “I do not wish men to die but to live forever. Death is degrading and an insult to the dignity of man. Man ought to die like the moon, which dips in the life-giving waters of Kane and is renewed again, or like the sun, which daily sinks into the pit of night and with renewed strength rises in the morning.”

Once again determined to prove his brothers wrong, he turned to them for help in overcoming Hine-nui-te-po. He found out where she lived and turned his brothers into birds so as not to awaken her fury. Telling them to keep quiet until he had taken her heart and emerged again, Maui entered her stomach to tear out her heart and destroy her forever. A laugh from one of his brothers awoke her, however, and he was killed, destroying the hope of immortality on Earth. After his death, Maui’s wife took revenge on spirits and gods, destroying as many as possible in Maui’s memory.

The Legend of the Naupaka Flower 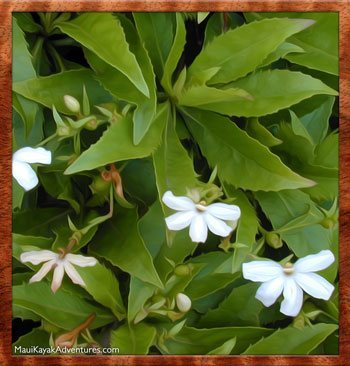 The Naupaka is one of Hawaii’s most common beach plants that includes a flower with a unique appearance. A half flower with missing petals, early Hawaiians believed it was the incarnation of an ancient native separated from her lover.

Old villagers noticed that the beautiful Hawaiian princess, known as Naupaka, was sad, and she told them how she had fallen in love with a fisherman named Kaui, a commoner not of noble birth. According to Hawaiian tradition, it was strictly forbidden for royalty to marry commoners, diminishing their hope for eternal love. In search of help, they traveled far away to visit a kahuna at a heiau, or temple, who told them simply to pray about it.

Knowing they could not be together, they embraced for one final time and she took the flower from her ear and tore it in half, giving one half to Kaui to go live down by the water while she stayed up in the mountains. Nearby Naupaka plants saw their sadness and began to bloom in half flowers ever since.

A beautiful young princess named Popoalaea once caught the attention of a powerful, older warrior chief named Kakae and became his wife. Kakae became jealous and suspicious that his wife was cheating on him, so he beat her and made her life miserable. Wanting to escape his evil ways, Popoalaea fleed with one of her female friends to a lava cave at Wai’anapanapa, hidden by a pool of water at the entrance of the cave.

In search of her whereabouts, Kakae furiously discovered their reflections in the pool of water, ordering his men to kill them both, darkening the rocks of the cavern with blood. Today, it’s said that on certain nights, the water appears red, perhaps due to the gathering of the red opae-ula (tiny shrimp) in addition to a reminder of the blood of the slain princess.

Did we miss any of your favorite Maui legends? Let us know in the comments below!

The Extreme Traveler’s Guide to Maui
Scroll to top