Sprawling beaches, crashing waves, hidden waterfalls and volcano sunrises are just a few of the reasons travelers from around the globe make their way to Hawaii each year. But beyond the picture-perfect tropical bliss, the Aloha State is lucky enough to host another type of annual visitor, and travelers come to see our beloved humpback whales in Hawaii. 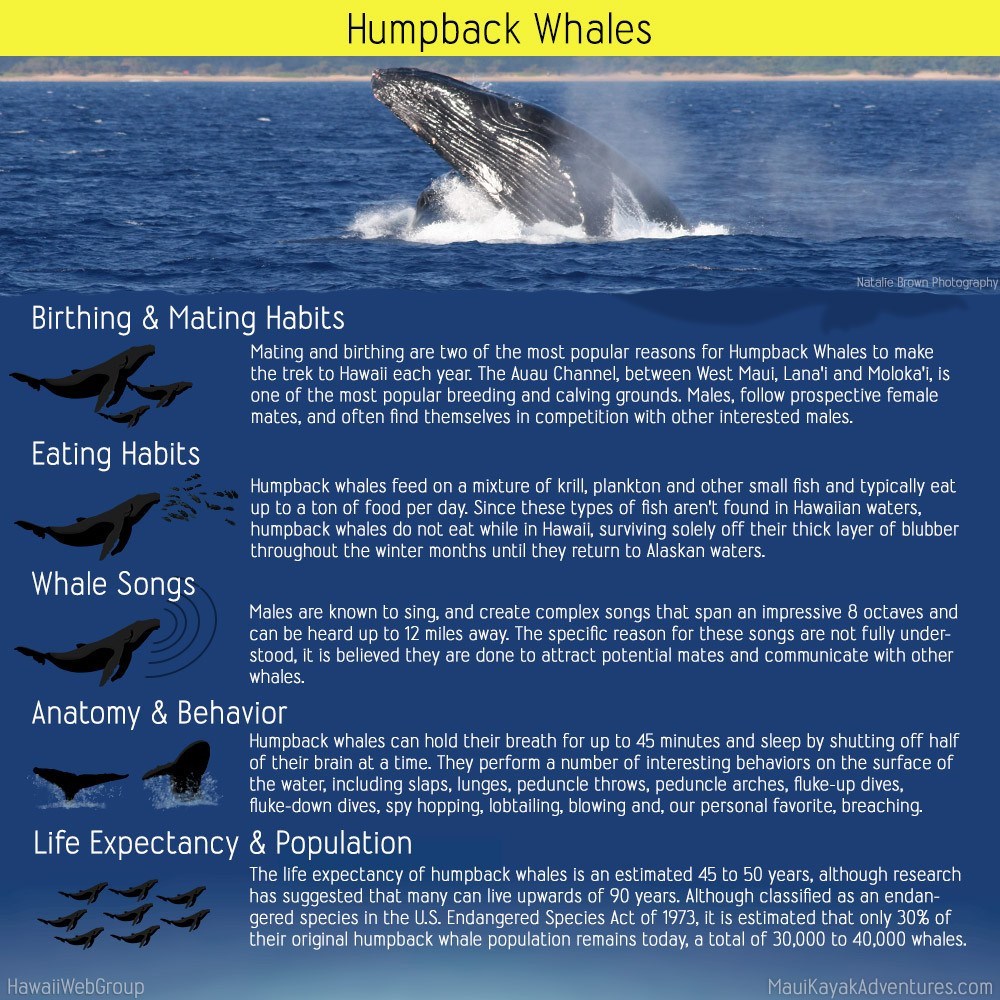 Each year from December to May, there are an estimated 12,000 humpback whales in Hawaii, or 2/3 of the entire North Pacific humpback whale population, make the 3,000+ mile swim from the Gulf of Alaska to breed, calve and nurse their young in the shallow, warm waters around Hawaii.

Kohola, or humpback whales in Hawaiian, are identified by white markings on their underside as well as extraordinarily large flippers, approximately 1/3 of their body length and the largest of any whale species. It’s estimated that humpback whales weigh an average of 30 to 50 tons and reach 48 to 63 feet in length, with females growing slightly larger than the males. The fifth largest species of whale, humpbacks take an average of 10 years to reach full growth and 15 years to reach full sexual maturity.

While humpback whales have been known to live together in large pods of up to 20,000 whales, it appears that they only travel together for a few days at most, making the long trek from Alaska to Hawaii each year mostly solo. Known as filter feeders, humpback whales feed on a mixture of krill, plankton and other small fish and typically eat up to a ton of food per day. Since these types of fish aren’t found in Hawaiian waters, humpback whales in Hawaii do not eat while here, surviving solely off their thick layer of blubber throughout the winter months until they return to Alaskan waters. 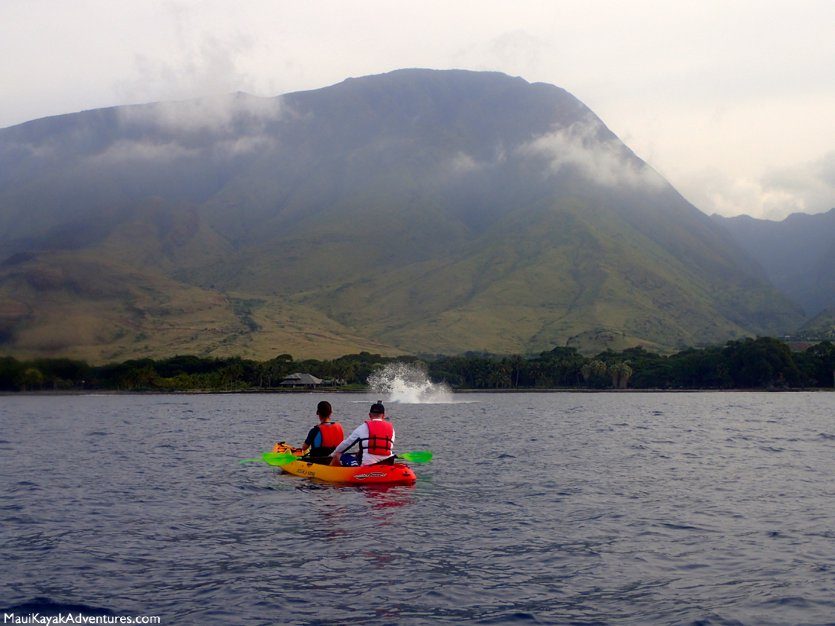 Some humpback whales have been known to create a “bubble net” around their prey, accomplished when several whales blow bubbles through their blowholes, swim in a circular motion and successfully trap the prey in the center. They then swim through the center of the bubble net and are able to feed easily.

In addition to Hawaii, Japan and Mexico are also popular winter birthing grounds for female humpback whales. It is believed, however, that a female conceived in Hawaiian waters will return to give birth to her calf in the same vicinity. Auau Channel, the shallow area between West Maui, Lana’i and Moloka’i, is one of the most popular breeding and calving grounds in all of Hawaii.

The link between mother and calf is extremely important; females nurse their calf for nearly a year and play a vital role in teaching them how to swim and defend themselves in the water. Calves consume approximately 100 pounds of their mother’s milk per day and learn how to swim within 30 minutes of being born. While thousands of humpback whales in Hawaii give birth each year, a birth has yet to be documented or filmed, still leaving many questions unanswered for researchers and scientists of whale behavior.

Since mating and birthing are two of the most popular reasons for humpback whales to make the trek to Hawaii each year, competition pods, or males fighting to win the attention of females, are a common occurrence. As males, often known as escorts, follow prospective female mates, they may find themselves in competition with other interested males. In order to win the affection of a female, males have been known to display a behavior called butting, where they collide both above and below the water with another whale in a display of strength, agility and power. Since females are larger, however, they remain largely the boss and may choose not to mate at all or dismiss the winner altogether.

Humpback whales are not monogamous and will likely have several partners throughout their lifetime, with females typically giving birth once every two to four years.

One of the most amazing things to experience underwater is the melodic sounds of singing whales. Only males are known to sing, and create complex songs that span an impressive 8 octaves and can be heard up to 12 miles away. Typically lasting from 10 to 20 minutes long, these melodies can be repeated continuously for hours at a time. In fact, every singing male humpback whale in the North Pacific has been recorded singing the same song with small changes that gradually adapt throughout the season. Although the specific reason for these songs are not fully understood, it is believed they are done to attract potential mates and communicate with other whales.

Like dolphins, humpback whales breathe voluntarily and sleep by shutting off half of their brain at a time. With the ability to dive up to 700 feet below the surface, humpback whales are able to hold their breath for up to 45 minutes. However, the typical adult will come up for air every 10 to 15 minutes, making sights an extremely common occurrence during the winter months in Hawaii. Tubercles, or the round bumps found on the top of the head and lower jaw, contain at least one hair stemming from each, which is believed to contribute to their sense of movement in nearby waters. One of the easiest ways to spot these majestic creatures is by looking for the mist rising from their blowhole, of which there are two that sit side-by-side on the top of the head.

Humpback whales perform a number of interesting behaviors on the surface of the water, including pec slaps, tail slaps, head slaps or lunges, peduncle throws, peduncle arches, fluke-up dives, fluke-down dives, spy hopping, lobtailing, blowing and, our personal favorite, breaching, where they use the power of their tail to propel themselves out of the water, ending with a spectacular splash on the water’s surface.

Humpback Whales Off Of Maui

The life expectancy of humpback whales is an estimated 45 to 50 years, although research has suggested that many can live upwards of 90 years or more. Although officially classified as an endangered species in the U.S. Endangered Species Act of 1973, it is estimated that only around 30% of the original humpback whale population remains today, a total of 30,000 to 40,000 whales.

In Hawaii, kohola are treated with great respect as aumakua, or family guardians, and are widely celebrated each year with events like Humpback Whale Awareness Month (every February since 2012) and World Whale Day, a family-fun event held annually in Kihei, Maui.

One of our favorite times of year is Whale Season, and we always encourage our guests to join us for a unique experience on the water to see these amazing animals in action. Skip the large boat tour and join us for a much more intimate, personalized whale watching experience from a kayak.

Mahalo for reading, and please share your best Hawaii whale watching experience (so far) in the comments below. Hope to see you on the water with us soon!

We Got Mugged! (Video)
Scroll to top